I think my buddy Keith is Ganesha Games' best customer. I honestly don't know if there is a title that they have put out that he hasn't bought. So, it was no surprise that shortly after Star Eagles -- there is Star Fighter space combat game came out -- that Keith suggested he run it for us on a Sunday evening. Apparently, there were enough budding Luke Skywalkers among us and we agreed.
It was an interesting "wrapping our heads around the rules" time prior to the start of the first turn. We realized that we weren't really sure how to move the ships. In this case, our extensive experience with Ganesha Games products (makers of the Song of Blades and Heroes -- and incidentally, co-publisher of my own Song of Drums and Tomahawks rules) actually worked against us understanding the rules! A staple feature of this engine is different size of movement sticks (Large, Medium, Small). As it turns out, these sticks are only for the weapon ranges. There is a hexagonal template that is the movement template for all the star fighters.
Another interesting variant is that rolling for activations -- another staple mechanic of Ganesha -- has almost zero effect on the distance you move. It simply provides you with actions you can use to shoot, do evasive maneuvers, or take tighter turns. Otherwise, if you get no activations, you still move the designated number of movement templates for your ship class. You just don't get a chance to do anything other than move straight ahead or make a gentle turn.
Once we figured that out, we were off and running...er, flying! Keith started us off each with a fighter (smallest ship) and divided us into two teams of three. He warned us that ships were fragile and we discovered that quickly as the game lasted less than an hour. We decided to play another game with medium ships, and let Keith play for a seven-player, free-for-all. The medium ships were a little more survivable, but not much. Most of the time, one good hit blew up a ship.
I really liked the way you roll to shoot another ship with your weapons. Essentially, you get a certain number of d6 depending on your weapons or defensive situation (evasive maneuvers, etc.). Your score that you need to hit is your pilot's quality. Keith had given us all Veterans, which meant we needed 3's or higher. A better shot (lining up on the tail of an enemy ship or closer range) gives you more dice. Once hits are scored, you need to roll armor saves -- if your ship has any. Some ships have the"Rugged Construction" trait. which gives them an additional 1/3 chance of saving vs. the hit.
We all saw possibilities with the rules. There are four sizes of ships (I believe), and four different qualities of pilots. There are a wealth of weapon types and special traits for weapons, so there is a lot of granularity going on with the rules. After the free-for-all ended with Brian blowing up the last two ships, we declared it would be worth playing again.
Posted by Mike Demana at 9:04 PM

Check out these painted and based armies I'm selling

Check out my game company!

Skirmish Warfare in the Modern World

Song of Drums and Tomahawks

Scenario book for Song of Drums and Tomahawks covering the Pequot War, 1636-38

For King or Empress

For Queen and Planet

Get emails when I update 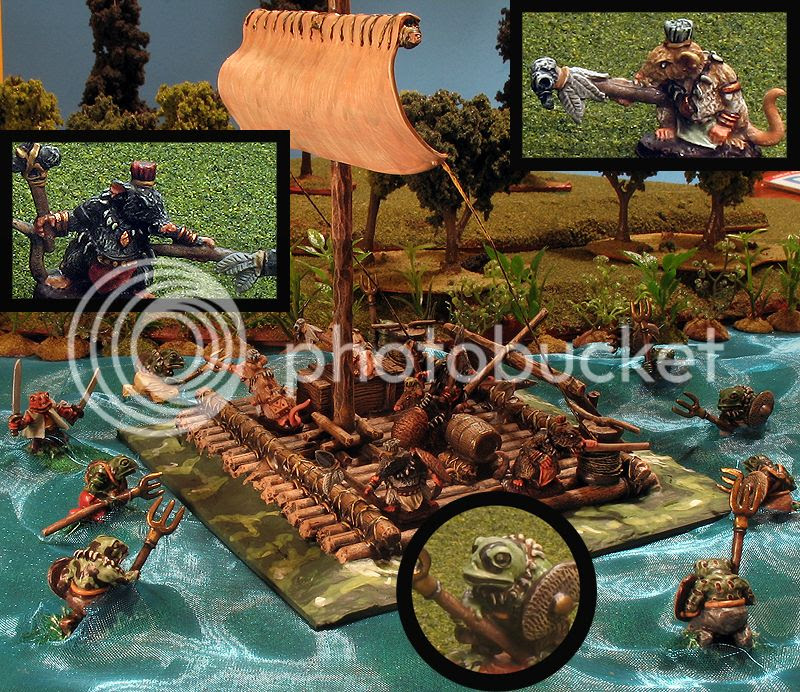